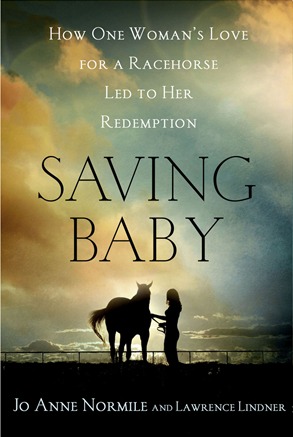 Few people ever call up the courage to create the life they envision, leaving their dreams forever unfulfilled. But Jo Anne Normile did just that, only to find she was living the wrong dream. Driven by what she learned, she transformed her regret into the pursuit of an entirely different vision—one that would cost her personally yet let her transcend her mistake by creating life-changing gain for so many others.It all started with her beloved horse Baby, with whom she shared as strong a bond as a mother and child. Baby could be hundreds of feet away, on the far side of the pasture behind the house, but if he saw Normile coming through the kitchen door, he'd leave off grazing on the rich summer grass and come toward her. If she clapped, he broke into a gallop to reach her faster. He loved rubbing his head against her hands. She, in turn, would kiss that velvety part of his muzzle between his nostrils. It was difficult to let him go to race at the track, away from her pasture, from the back door where she'd often find him waiting for a tasty snack or to say hello. But she had made a promise to the man who sold him to her. And on television at least, horseracing had always come across as a glamorous mélange of mint juleps and celebrity set against a backdrop of equine grace and speed. It was a vision Normile liked. What could be a better nexus of beauty and brawn than a blanket of red roses thrown over a shimmering Thoroughbred while his owner held the trophy? But as she gradually learned, the magic that enchants is a veneer. For every Seabiscuit, there are tens of thousands of racehorses whose experiences on the back lots of the country's tracks tell a different, often harrowing, story. It's not that Normile didn't experience a thrill every time Baby sprinted around the track. She fell hard for the adrenalin rush of gleaming, well-muscled horses running faster than any other animal in the world as they cover distances of a mile or more, her heart rising to her throat each time Baby drove into the homestretch turn. The Sport of Kings, as it is known, is like a drug, an intoxicating ecstasy, that transfixes. But once Normile learned the truth, she did a complete about-face, even pulling from the racecourse a promising granddaughter of Secretariat poised to win no small amount of money. And she founded the most successful horse rescue in the country, saving more horses than anyone else ever has. SAVING BABY, a memoir, tells her life-changing story of love, regret, and redemption.